Posted at 16:16h in Statistical Methods by Kevin 0 Comments

First of all, it is important to be aware that no statistical software guarantees the results it provides, even the most widely used software (including Excel).

pvalue.io is still new. It is a graphical interface to R, which is a reference statistical analysis software, as well as SAS, Stata and SPSS.
To produce and display the results, pvalue.io uses two extensions of R (packages) which are open source, therefore totally transparent, allowing everyone to check the quality of the code.
These two extensions are as follows:
– shiny, which allows to create graphical user interfaces
– simplestats, which contains high-level functions to simplify the presentation of results. This package determines the tests to be performed, the appropriate statistical models, the covaraites, and which displays figures and tables. In other words, simplestats controls the logic of pvalue.io.

Here we propose you to carry out a comparison of the results of analysis on R and on pvalue.io. To reproduce the results it is necessary to use the file described on the next page.

Is the age different by gender? Welch T test

Occlusion as a function of adherence: Chi2 test

The following analyses do not necessarily make sense, it is only a matter of verifying that the results provided by pvalue.io are correct.

Influence of treatment, age, presence of bowel obstruction and occlusion on progression-free survival 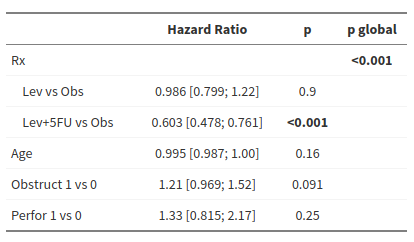 As you have noticed, on these few examples, pvalue.io provides exactly the same results as R. This is not a coincidence: pvalue.io was created from R and simplestats and therefore benefits from their communities of contributors.
Share
Print page

This site uses Akismet to reduce spam. Learn how your comment data is processed.